When it comes to Bruges little indulgences, there’s no need to waffle. Take your pick of soft-centred seashells at Katelijnestraat’s chocolatiers, try the light-as-air pancakes at Café au Lait, then let a beer and the evening sun warm you at the terraced taverns on Eiermarkt. 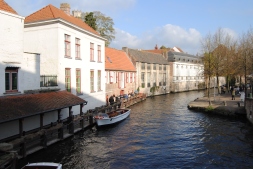 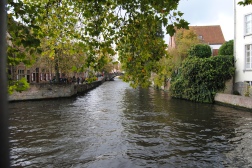 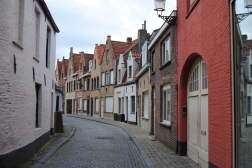 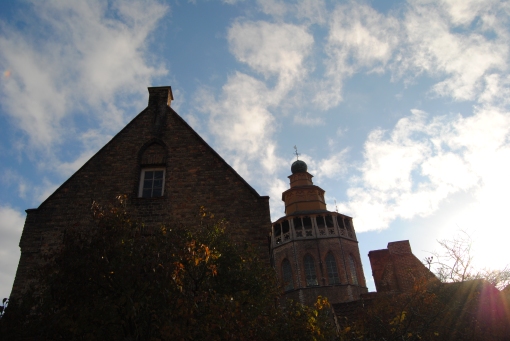 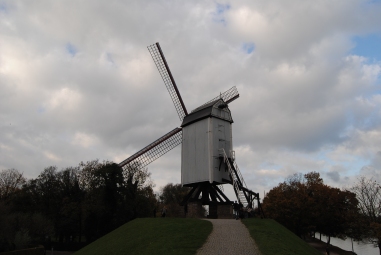 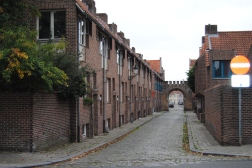 I think nowhere in the world would it be easier to imagine the sounds in medieval Market Square. A fishmonger shouts to the crowds, a tanner thwacks a leather hide with a mace, and a blacksmith’s hammer clinks against a horseshoe. Fade in to the present – friends make merry in the terraced cafés, couples clutch their accursed selfie sticks in front of the Belfry, and children peer up at statues of heroes of the Flemish resistance. The clock strikes twelve in Market Square. The sound reverberates off statues and shop windows, attracting the attention of passers-by. The sound’s source is the belfry – one of Bruges’ most iconic sites. Built and rebuilt for eight centuries, it’s a stack of Neo-Gothic spirelets, topped by an octagonal clock tower. Clamber up the staircase to see the city in all its glory.

Time for a square dance. This is Bruges at its most architecturally diverse. Take a tour of styles, starting with the Gothic grandeur of the Town Hall and Chapel of the Holy Blood. Wheel round to admire seethe Renaissance flourishes of the Old Civil Registry, admire the neoclassical Court of Justice, and gasp at the baroque boldness of The Deanery. 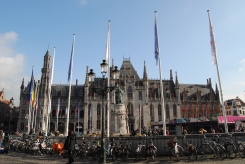 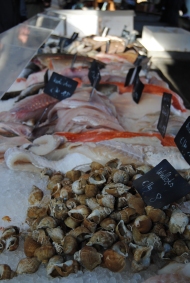 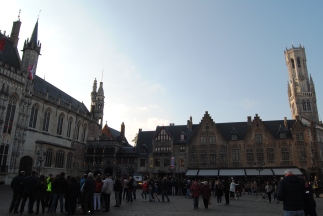 The church of our lady: A steady stream of people flock to this church. Some come to gaze up at its Romanesque and Gothic architecture, its flying buttresses and soaring colonnades. Others venture in to admire Michelangelo’s Madonna and Child and the tombstones of Charles the Bold and his daughter, Mary of Burgundy. For many Catholics, it’s a link in a spiritual chain that’s been unbroken for centuries.

Our hotel was near the Jan Van Eyckplein. Jan van Eyck was a Flemish painter active in Bruges. He is often considered one of the founders of Early Netherlandish painting school and one of the most significant representatives of Northern Renaissance art. The few surviving records of his early life indicate that he was born c. 1380–1390, most likely in Maaseik. Van Eyck painted both secular and religious subject matter, including altarpieces, single panel religious figures and commissioned portraits. You can see a nice statue of him at this place and eat delicious in the restaurant nearby.

The Mayans ground it into gruel. The Aztecs used it to boost their libido. Just around the corner of this Jan Van Eyckplein is the choco-story. Today, cocoa’s a prized commodity and the prime ingredient of chocolate. See just how far humans have gone to satiate their sugar cravings in the museum, where you can take a workshop in the art of moulding. Alternatively, sit in the café and sip a hot chocolate that’s as smooth as butter.