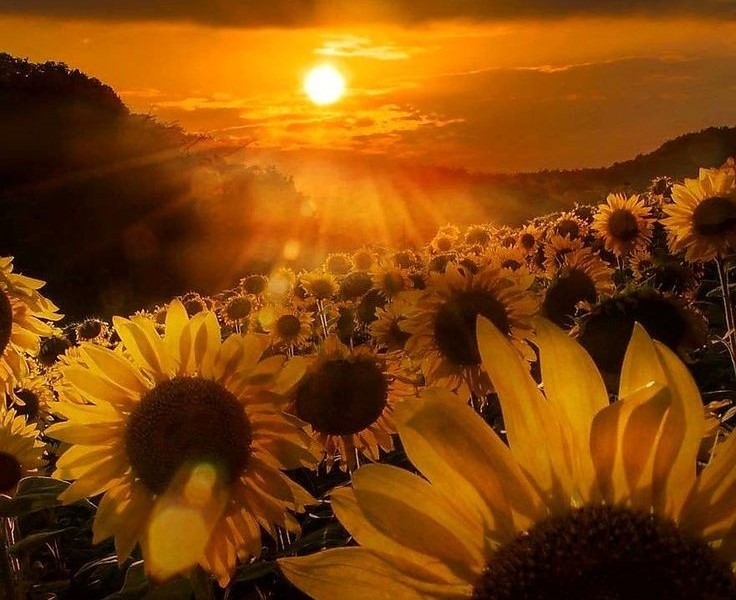 We are all sunflowers in any way.

Clytie and Leucothea, were water nymphs. Early every morning they used to come up from the depths of their river, with other nymphs from neighboring streams and fountains, and dance among the water-plants on its shores. But with the first rays of the rising sun, all the dancers plunged back into the water and disappeared; for that was the law among water-nymphs.

One morning Clytie and Leucothea broke this law. When the sun began to show above the hills, and all the other nymphs rushed back to their streams, these two sat on the bank of their river, and watched for the coming of the sun-god. Then as Apollo drove his horses across the sky, they sat and watched him all day long.

They thought they had never seen anything so glorious. The god sat in his golden chariot with his crown on his head, and kept a firm rein on the four fire-breathing horses. The two women were dazzled by the glitter of the chariot and the radiance of the jewelled crown. Apollo smiled upon them, and they were happy.

When night came, they returned to their river, where they could think of nothing else but Apollo and his golden chariot.

After a dispute, Clytie told King Oceanus how Leucothea had broken the law of the water-nymphs, but she did not say that she herself had broken it also. King Oceanus was very angry, and shut Leucothea up in a cave.

When night came, Clytie did not go down to her home at the bottom of the river, but sat on its sandy bank, waiting for the coming of the Sun; and when he came again, she watched him, all day.

But Appollo did not reply her love, he never looked her way, he never smiled on her.

So she wasted away, deranged by her experience of love. Impatient of the nymphs, night and day, under the open sky, she sat dishevelled, bareheaded, on the bare earth. Without food or water, fasting, for nine days, she lived only on dew and tears, and did not stir from the ground. She grew so very thin that you would have thought the wind might blow her away.

She only gazed at the god’s aspect as he passed, and turned her face towards him. They say that her limbs clung to the soil, and that her ghastly pallor changed part of her appearance to that of a bloodless plant: At last her dainty feet, that had danced so lightly with the other nymphs, took root in the loose sand; her fluttering garments became green leaves; and her face, which was always turned toward the Sun, became a flower.

Though her roots hold her fast, her love remains unaltered.

This flower still grows, in wet, sandy places, and still it turns slowly on its stem, always keeping its face toward the sun.