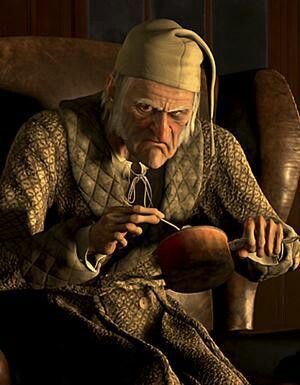 You can’t cut yourself into pieces to keep others whole.

The story of A Christmas Carol starts on Christmas Eve 1843 with Scrooge at his money-lending business. He despises Christmas as a “humbug” and subjects his clerk, Bob Cratchit, to grueling hours and low pay of only a few shillings on a normal week. He is giving him Christmas Day off with pay, begrudgingly and considering it like being pickpocketed, he only does it due to social custom. He shows his cold-heartedness toward others by refusing to make a monetary donation for the good of the poor, claiming that the prisons and workhouses are sufficient, and if not they are better off dead, thereby “decreasing the surplus population.”

While he is preparing to go to bed, he is visited by the ghost of his business partner, Jacob Marley, who had died seven years earlier (1836) on Christmas Eve. Like Scrooge, Marley had spent his life hoarding his wealth and exploiting the poor, and, as a result, is damned to walk the Earth for eternity bound in the chains of his own greed. Marley warns Scrooge that he risks meeting the same fate and that as a final chance at redemption he will be visited by three spirits of Christmas: Past, Present and Yet-to-Come.

The Ghost of Christmas Past takes Scrooge to see his time as a schoolboy and young man, during the late 18th and early 19th centuries. These visions reveal that Scrooge was a lonely child whose unloving father sent him away to a boarding school. His one solace was his beloved sister, Fan, who repeatedly begged their father to allow Scrooge to return home, and he at last relented. Fan later died after having given birth to one child, a son named Fred, Scrooge’s nephew. The spirit then takes him to see another Christmas a few years later in which he enjoyed a Christmas party held by his kind-hearted and festive boss, Mr. Fezziwig. It is there that he meets his love and later fiancée, Belle. Then the spirit shows him a Christmas in which Belle leaves him, as she realizes his love for money has replaced his love for her. Finally, the spirit shows him a Christmas Eve several years later, in which Belle is happily married to another man.

Scrooge is then visited by the Ghost of Christmas Present, who shows him the whole of London celebrating Christmas, including Fred and the impoverished Cratchit family. Scrooge is both bewildered and touched by the loving and pure-hearted nature of Cratchit’s youngest son, Tiny Tim. When Scrooge shows concern for the sickly boy’s health, the spirit informs him that the boy will die unless something changes, a revelation that deeply disturbs Scrooge. The spirit then uses Scrooge’s earlier words about “decreasing the surplus population” against him. The spirit takes him to a spooky graveyard. There, the spirit produces two misshapen, sickly children he names Ignorance and Want. When Scrooge asks if they have anyone to care for them, the spirit throws more of Scrooge’s own words back in his face: “Are there no prisons, no workhouses?”

Finally, the Ghost of Christmas Yet-to-Come shows Scrooge Christmas Day one year later. Just as the previous spirit predicted, Tiny Tim has died; his father could not afford to give him proper care on his small salary and there was no social health care. The spirit then shows Scrooge scenes related to the death of a “wretched man”: His business associates snicker about how it’s likely to be a cheap funeral and one associate will only go if lunch is provided; his possessions are stolen and sold by his housekeeper, undertaker and laundress, and a young couple who owed the man money are relieved he is dead, as they have more time to pay off their debt. The spirit then shows Scrooge the man’s unkempt tombstone, which bears Scrooge’s name.

Scrooge weeps over his own grave, begging the spirit for a chance to change his ways, before awakening to find it is Christmas morning. He immediately repents and becomes a model of generosity and kindness: he visits Fred and accepts his earlier invitation to Christmas dinner, anonymously sends Bob Cratchit a giant turkey and later gives him a raise, and becomes like “a second father” to Tiny Tim (providing him the medical care he needed to live). As the final narration states:

Some people laughed to see the alteration in him, but he let them laugh, and little heeded them; for he was wise enough to know that nothing ever happened on this globe, for good, at which some people did not have their fill of laughter in the outset; and knowing that such as these would be blind anyway, he thought it quite as well that they should wrinkle up their eyes in grins, as have the malady in less attractive forms. His own heart laughed: and that was quite enough for him…it was always said of him that he knew how to keep Christmas well if any man alive possessed the knowledge.

I defenitely love this story, because it shows that anyone can change and that money isn’t everything in life. A good heart leads you everywhere you want to go and gives you more in return than money ever will be able to buy.

I am aware of my ghosts and today even more than ever.

They visited my friend today – and I hope that this is just a little small nightmare, a warning shot to make it better. To have the courage living the life you want.

Because you can’t cut yourself into pieces to keep others whole.