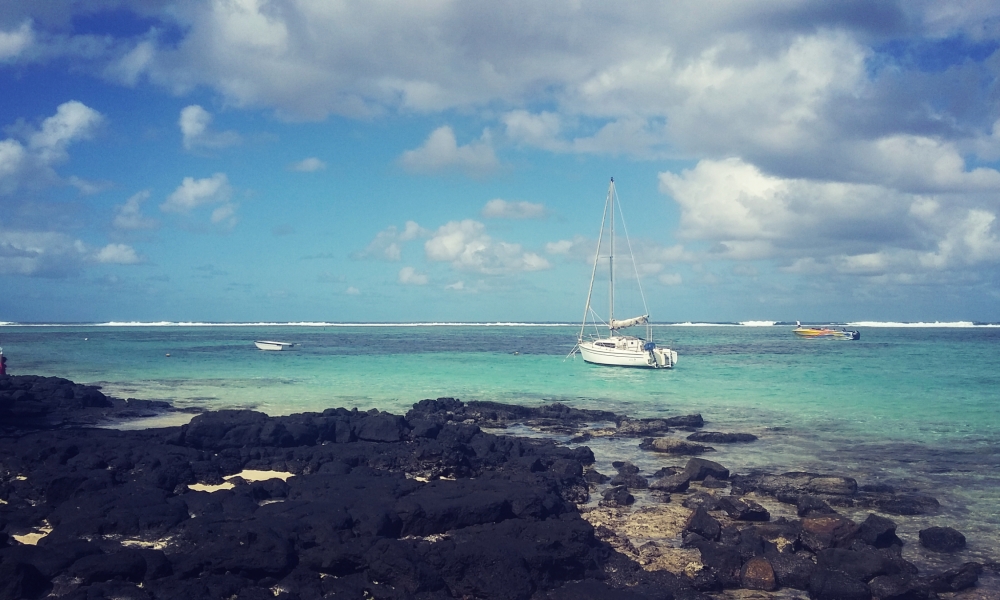 When I flew to Mauritius, I had no expectations of this vacation spot. I knew that there are beautiful beaches and warm weather. That was enough for me to attract myself. If I had known earlier that Mauritius is so versatile and offers so many different things, I would have gone there a long time before.

My trip started at the Seewoosagur Ramgoolam International Airport of Mauritius, which is quite in the south. This was perfect for me, because the hostel I booked cheaply was also in this direction near Blue Bay (on the south-eastern coast of the island). At the beginning, I was a little bit disappointed. The city of Mahébourg is not very beautiful and it is a single construction area with many houses resembling to ruins.

Mahébourg is a small city and is considered the main village of the Grand Port District. The well-planned wide streets in the old section of the city still bear testimony to this Dutch and French colonial past. But after the French chose Port Louis as the main port, Mahébourg declined into a sleepy coastal city. If you want to eat in the evening, you will have trouble to find any open restaurant. The past is still preserved today in the Historical Naval Museum which also recounts the epic naval battles of the past between the French Navy and the Royal Navy.

Very interesting was the extreme interest of the residents for my tattoos. Nearly everyone I met asked me how I could have done this so filigree. And if you watch the resident’s tattoos, you are often shocked by the bad quality of their tattoo work. Like a painting from a kid…

My first steps were toward the beach, as I always do, reaching a place with seaside. So I took a towel and walked towards Blue Bay. On the map, this seemed not to be far away, but in reality, it was a long walk. Mostly because of all the private beaches which did not allow me to pass.

The Blue Bay Beach is absolutely awesome once you’ve reached it. I watched the wild dogs playing in the sand and there were only few people lying at the beach. It was clean and the panorama was so impressive that I lay down until the sun kissed the horizon. 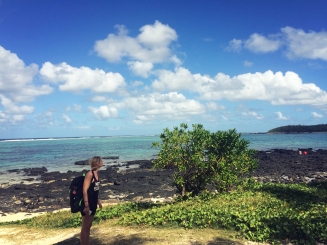 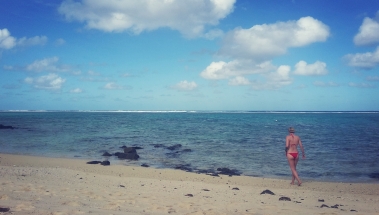 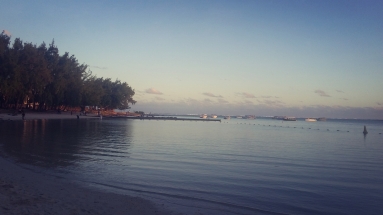 I found out that there is also a bus you can use for very few money. It’s very cheap and easy to get from A to B. The only thing missing is a plan. There are several, but no public transport ever seemed to follow this plan.

After two days of beach, I wanted to visit the Isle aux Cerfs. The residents said that this Isle is the most beautiful one, so I followed their advice and booked a catamaran cruise for the next day including BBQ lunch.

This cruise picked me up at Blue Bay at 9 am, offered unlimited drinks and a stunning view back to the Isle of Mauritius.

It was wonderful. I swam in calm waters, snorkeled with colorful reef fish and soak up the glorious sun rays and simply relaxed. At the GRSE river, which we visited, I saw the lush vegetation that lies on either side of the river’s banks and where I had the chance to spot monkeys and bats on the tree tops before reaching the waterfalls. I even saw dolphins during the trip.

Then after I was served a delicious BBQ lunch prepared by a friendly crew, I reached Isle aux Cerfs, which is truly a perfect piece of paradise. Once on the island I went for a walk on the beach and enjoyed the islands renowned sand bank before setting Preskil Beach Resort with a chilled drink in hand whilst listening and dancing to the sound of the Sega music played by the crew members. I didn’t want to, but at 4 pm I was back at Blue Bay. Thank you Preskil Beach! 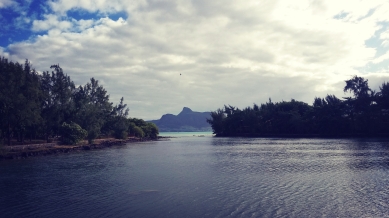 To not annoy myself, I wanted to visit some more. In addition to that, the hostel was not the absolute highlight. The worst thing on it was the muezzin which startet every single day on time at 5 am in an audibleness you are not able to sleep any longer. Mauritius is very multi-cultural concerning its religions. There is about 50 percent Hinduism, 30 percent Christianity and round about 20 percent Islam. They are all living together in peace and this was absolutely wonderful. They accept the religions of the others unconditionally. It sure would be interesting to visit the Isle’s big Grand bassin hindu temple.

So I took the bus to get on the other side of the Isle – course north-west. This was the worst idea I had during this holiday! It wasn’t difficult to find and because Mauritius isn’t that big, I thought about taking this distance in about 4 hours. But far wrong – it took me a whole day…..

So because of that, I didn’t visit Port Louis. But this was not the problem, because I was not there to go shopping. Besides, Flic en Flac has an own shopping mall called Cascavelle. Unfortunately, I could not ignore it.

I checked in at West Coast View & Spa. A wonderful apartment on a slope. The owner offered me a bike and for that, the ride to the seaside felt free and exciting. The beach there is at least as beautiful as the beaches before. And I don’t know why, but I liked this place much and felt very comfortable there. 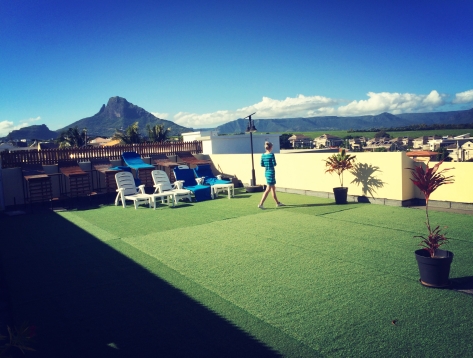 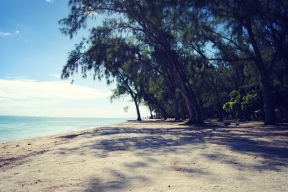 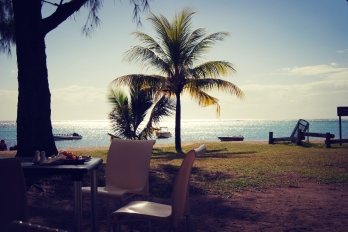 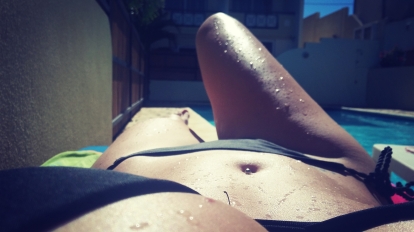 I took a car and visited Le Morne Brabant, this is a peninsula at the extreme  south-western tip of Mauritius on the windward side of the island. It is highlighted by an eponymous basaltic monolith with a summit 556 meters above sea level and there are many caves and overhangs on the steep slopes. It is largely surrounded by a lagoon and is a well known tourist attraction. It is also a refuge for two rare plants, the Mandrinette and the Boucle d’Oreille. 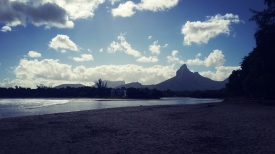 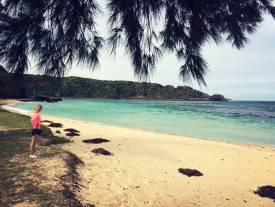 Unfortunately, I had no time to visit les 7 Cascades (Riviere Noire) and the Chamarel Waterfall. Definitively one reason to come back one day! With its 11 waterfalls and 13 abseils, deep ponds, cliff jumps and surrounding lush green vegetation, The Tamarind Falls 7 cascades represent one of the most spectacular natural sites of Mauritius. The waterfalls of Chamarel (Cascade Chamarel) instead have a height of 83 meters and are surrounded by lush vegetation of Black River Gorges. You can have a vivid view of the waterfalls from both a lower and an upper viewpoint from the Black River National Park. And you can also swim at the bottom of the falls.

Instead of going there, I set my priority to visit Casela World of Adventures. I read a lot about this park and because of my passion for animals, I favoured this.

There is a heart-throbbing array of adventures to choose from, including an African Safari, unique encounters with big cats, as well as the island’s only dry toboggans and scenic zip lines. 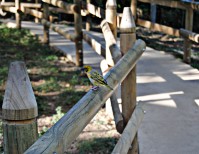 I didn’t want to go into a cage and caress a lion. This was not my notion of a happy animal. So I decided to walk with the lions. Normally you aren’t allowed to touch the animals and they aren’t fenced. Well, they are fenced, but the terrain is huge and big and the lions could run away if they would like. You get a single stick of wood so that the lion knows that you are a person of respect and then you take a walk with the lion similar to taking the dog out. These big cats impressed me this much, I could not hide my smile. It was awesome and I did never have the feeling that the lions were tortured or were on drugs.

Because of my broad smile which seemed wider than that of the lioness, the guides allowed me to touch the young lion when he sat down. I was afraid and impressed at the same time. It costed me quite an effort to kneel down. I could see that Tiguasa (that was the lion’s name) had rarely a lion’s mane because of his young age. He was clumsy and the long feet awkward and small. Looked very funny with his big paws. If it would have been possible, I would have hugged him for his cuteness. 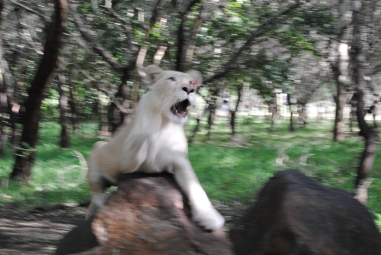 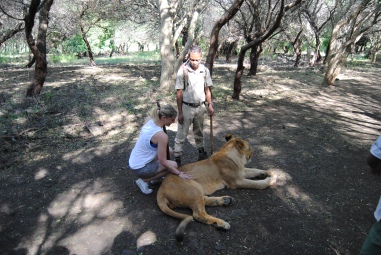 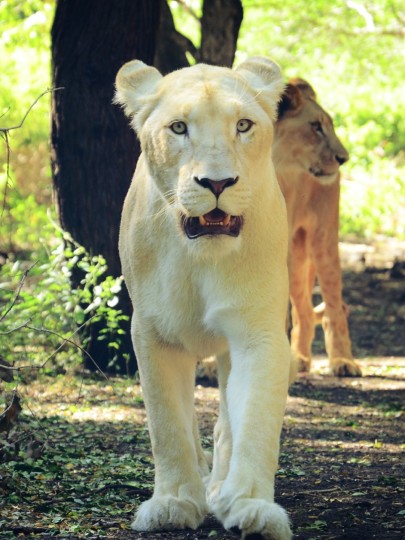 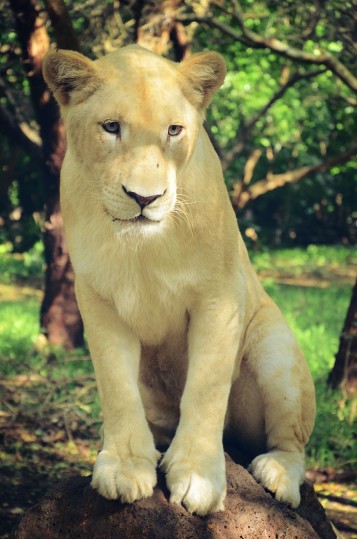 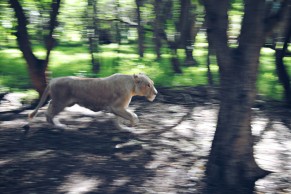 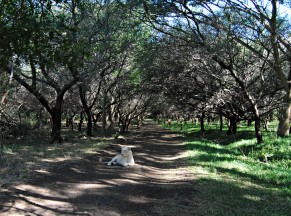 I don’t know which encounter was better, the one in Africa with the big elephant or this one… Anyway, it was an adventure I will never forget.

So Mauritius is not only for honeymoon, it is also to fall in love with all it’s offerings. Have a pleasant night Tiguasa – I think of you often.

And Mauritius, I will give your emblem (Dodo) a kiss: