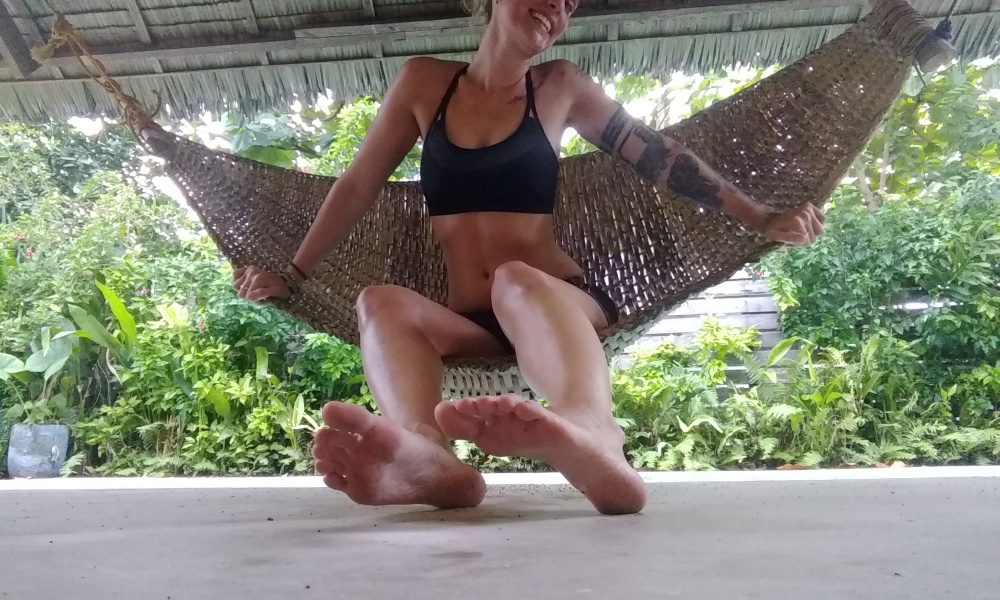 We arrived at the Sayak Airport in Siargao and there was a driver waiting for us with a table with our names on it. The driver was very friendly and took us about 40 minutes south-east of the island to General Luna. The drive was beautiful through green palm forests and little villages with children and farmers walking along the street.

Turtle Surf Camp is placed at the main road there which is called Tourism Road and hides his beauty behind a squeaking gate. My first impression was as positive as the last one and so our holidays began.

The Camp offers only four rooms being called like the surfing spots around Siargao. But not having more than these rooms makes the Camp a bit more familiar and I also liked having the pool and the hammock only for my boyfriend and me. The pool by the way is very clean and offers a swimming ring to chill out and relax. The hammock is attached above the edge of the pool and invites to hang around and read a nice book in calm and quiet manner. Behind this is a kind of bar with about six chairs, a comfortable seating area and a small kitchen offering you the most necessary stuff to cook by yourself. 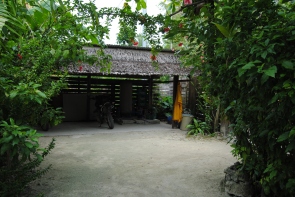 At first we had to search for any reception or something but didn’t find anybody. But as we are on holiday and have no hurry, this didn’t matter at all. For that, I cannot understand one of the negative reviews on booking.com. It’s no need to occupy a reception all the day long for only a few belongings.

After only a couple of minutes and this positive first pictures of the accomodation, the guy named Mingu came and showed us everything. He was also very friendly and seemed to live one of this surfer lifes.

The room from the inside offers a great bed with one big planket and four fluffy pillows. There is a small beside table and a shelf with a hanging rail to put on your clothes so that you don’t need to live out of your luggage.

Through a sliding door, you get to the big bathroom in a nice philippine flair. The ground of the shower and the sink are made out of wood and there’s a water boiler to get warm water for taking a shower.

Unfortunately the air-conditioning was leaking almost the whole week but the nice housekeeping woman Lilly was looking after it and tried to make anything as much comfortable as she could. (And in the end Mingu refunded us one night of payment because of the inconveniences, which was a very nice gesture)

In the common area there a some board games like chess and books as well as magazines. If you leave one book here by departure, you can take another one with you. There are also some boards to rent there, but it is obvious not the big business for them. I rented two times a board which was already broken one time and unfortunately I broke it one time again so that I had to pay for the repair (2.000 PHP). On a clothesline in the garden, the people are able to hang on their clothes to dry. By the way: the towels from the bathroom smelled awesome, really good feeling after a hot or cold shower.

We rented a scooter from a local via Mingu to be more flexible. This costed us 400 PHP per day, but I think this was the best invest we could have done. People afraid of driving theirselves can also wait at the street for some locals passing and picking you up for I think 40 PHP.

Then the adventure began and so we tried different restaurants along the street (they were all really good) and visited some surf spots. Everything is around Turtle Surf Camp of about 2-3 kilometres either the way up or the way down. So it’s very central and we really enjoyed our stay.

We got a tip to go to Stimpy’s for an intermediate or professional surfer like my man so we went about 3 kilometres north and hired a guy with a boat for two hours which took us out and waited there for us. Costs were about 200 PHP each person. I really appreciated it that they also told us when the conditions weren’t that good to go out so that we did not spent our money for nothing.

Cloud 9 is only two kilometres away and it’s even possible to reach it by walking or jogging.

Only problem for me was getting money on this island. There is a Catalan Bank (I think) two kilometres south, but I wasn’t able to withdraw money with my MasterCard and neither with my normal bank card. So I was a bit depending on my man but I luckily could revenge myself by paying the accomodation via PayPal. The owner of Turtle Surf Camp isn’t accepting anything else but cash or PayPal. But for us this wasn’t any problem, so also here I see no need for a bad review.

So everything I have to say anymore is that I really can recommend this beautiful place on earth and who knows – maybe we will see us soon again.