Via Mala – welcome to the South

The warm light of Tuscany and the gentle splendour of Venice: in culture-historical terms, southern Europe is often associated with aspiration and beauty. The Via Mala leads into this southern region, but it doesn’t yet reach the sea; it must first wind its way between rock faces. Flowing downhill, on the other hand, is the Hinterrhein River – although in reality, this flows into the high northern regions. And so, the Via Mala joins northern and southern Europe, forming a giant open-air museum of the region’s transportation history. Here, the gorge is presented in detail, with appropriate information on orientation. the Association of the Via Mala Cultural Region (‘Verein Kulturraum Viamala’) wishes you all the best in your discoveries, with experiences to treasure.

This is the general information written on a board directly at the main point of the Viamala Canyon. Viamala or Via Mala refers to a previously infamous, approximately eight-kilometer stretch along the Hinterrhein between Thusis and Zillis-Reischen in the Swiss canton of Grisons (or as we call it: Graubünden). The deep gorge forms the most difficult obstacle in the course of the lower road from Chur to the Alpine passes Splügen and San Bernardino.

We parked our car in Thusis, a small town with about 3.000 inhabitants, at the train station. From there, we walked only a few meters through the town and over a small little suspension bridge towards the forest. From here on, it was only uphill. The view got better and better, the forest was getting greener and greener and my calves burned more and more. Fortunately we reached our first stopover after half an hour: The Castle Ehrenfels (Sils).

The castle was very beautiful with a four-storey keep as the center of the plant and the complex was surrounded by a partly double curtain wall. The Castle belongs to the town Sils im Domleschg and was built in the 13th century, was occupied until the 16th century and was called a ruin in about 1740. As a result, the ruin was temporarily used as a quarry. The keep was almost at its original height, the residential area, however, was completely removed except for a few remains of the wall. The idea to use the stones of the castle for the construction of the Rhaetian Railway, failed because the breaking of the stones came more expensive than to get them in another quarry.

In 1933, the Swiss Castle Association acquired the heavily overgrown castle. Its first president, the controversial architect Eugen Probst intended to rebuild the castle as part of an employment program for the unemployed youth as a youth castle on the German model. At the end of July 1933, 25 young people began to cut down the undergrowth of the overgrown ruin, cut down trees and dig up the plant. The tower was also attached. After an interruption for financial reasons, the work was continued in 1936 and completed in the following years. In 1953, the castle was acquired by the Association for Youth Hostels (SJH) and today belongs to the Swiss Foundation for Social Tourism, Zurich. Since then, Ehrenfels has been used as a youth hostel, but is only available for groups. 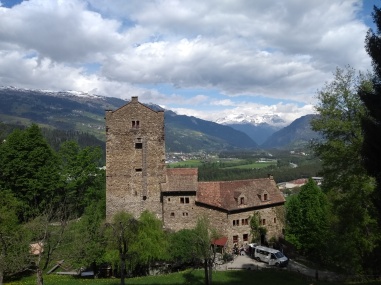 We went on to the furcation ‘Brünneli’ and reached a narrow forest path to our left straight uphill. The whole way is provided with road signs, so you can’t get lost. We only had to follow the signs “via Spluga” or the number 50.

This was the hardest part of the trail. But after roundabout two hours, we reached the Castle Hohen Rätien.

Also this building resembles more a ruin than a castle, but surrounded by beautiful meadows with wonderful flowers on it, it’s absolutely worth hiking all the way for it. The sprawling hill-top complex lies on the mighty head of the Crap Son Gion (German “Johannisstein”) and resides 946 meters above sea level. On three sides, the castle plateau is protected by vertical sloping rock walls, access to the system is only possible on the very steep south side over a 40 meters lower lying terrain saddle. The castle belongs to the Family Foundation of Jecklin and is under the protection of the Swiss Confederation and the canton of Grisons. To enter the ruin, you have to pay 5 CHF. 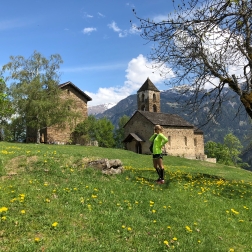 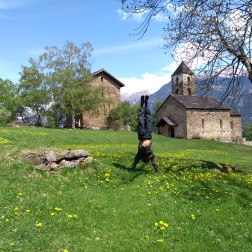 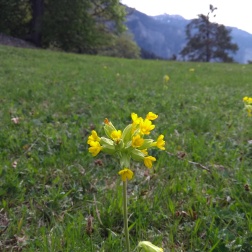 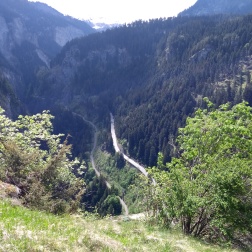 We continued our hiking tour and the forest was so beautiful. It is very clean and I love my man for his good manners by picking up the few waste which people lost on their way. We saw a caterpillar and some spiders along with some beautiful birds of prey. It was a tiring route, but I loved every step of it.

Another highlight was the Traversina Bridge: The bridge here closes a gap, while the steps overcome a difference in height. The Traversina Bridge, which opened in 2005, meets two needs: as a bridge, it acts a causeway over a 60-metre-wide side valley of the Via Mala, while as a staircase it overcomes the 22-metre difference in height. Absolutely wonderful and even people being scared of heights can walk over it easily. 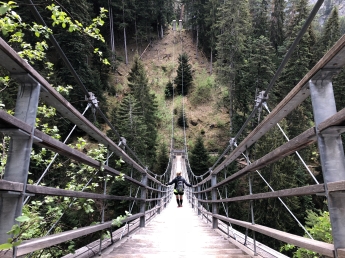 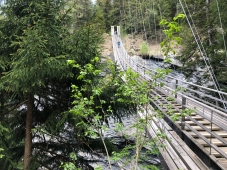 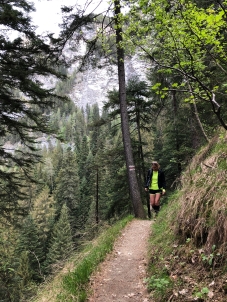 Having crossed this bridge, it isn’t far anymore to reach the main destination of our route: the visitor center of the Viamala canyon.

Unfortunately, we hadn’t enough time to go down the way to the water, but I am sure we will catch up on this soon. And I promise to make an update on this then.

Here you can get further informations: The Viamala is legendary. An impressive natural monument with up to 300 m high rock walls, which are separated at the narrowest points only a few meters apart……