Galicia? That’s there somewhere in Poland? Two (almost identical) names cause confusion. The “other” Galicia with “z” actually belongs half to Poland and half to Ukraine and was once closely connected to Austria. But why are the lands (almost) the same? The Spanish Galicia goes back to the Celtic Gallaeker (Latin Gallaeci), a Celto-Iberian people, who settled in the region in ancient times. And Polish Galicia is based on Galich (Latin Galicia), a small town in western Ukraine.

Galicia is the region of northwestern Spain that is so different from the rest of the country. Rich and lush green it is inland. No wonder it rains in the north around A Coruña just as intense as in Ireland. Even in midsummer it is not unbearably hot. From the rest of Spain Galicia is separated in the east by long mountain ranges. The highest peak, the Peña Trevinca, is at least 2,127 meters high. In the west, the rugged cliffs drop off into the Atlantic.

Arriving with the aeroplane, our first stop was Santiago de Compostela. I think most people know this city because of the Way of St. James – at least that was the case with me. I always wanted to walk a bit of this way on my own, but I didn’t succeed yet. I thought I could find myself on this long walk, but now I’m not sure anymore if this would work out for me.

Anyway… Santiago de Compostela is the destination of hundreds of thousands of pilgrims who master the Way of St. James. Every year there are more people that go the pilgrims rod along the scallop with a funny hat and the backpack. Either the entire 760 kilometers from Roncesvalles on the border with France to Santiago. Or a shorter piece. No matter. The Way of St. James is as long as you go. Along the way, you can choose between staying overnight in one of the many simple pilgrimage dormitories and bunk beds – or in one of the luxury hotels along the way, as they are there. The tomb of the apostle James is said to be in the cathedral. 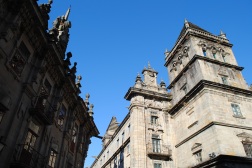 After having seen this city, I fear of not being religious enough… But I really liked the  non-christian-part near the church: Mercado de Abastos de Santiago. The people seem to be stuck in the past with their classical role allocation. The men are out for fishing in the early early morning and the women do sell the haul on the market. 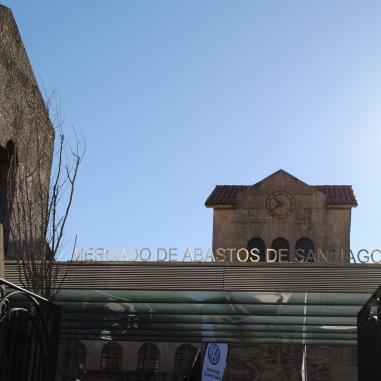 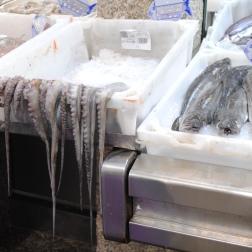 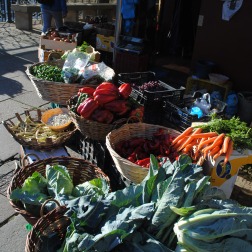 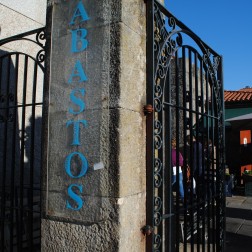 And Santiago is not the last stop on the Way of St. James, but this is the little church on Cape Finisterre, which means “the end of the world”. In the past, people actually believed that this was the end of the world. The cape is not even the westernmost point of mainland Europe. It is located in Portugal at the height of Lisbon, the Cabo do Roca. To be honest, I did not see a church there, but a pretty lighthouse.

They say the lighthouse of Finisterre is one of the most beautiful in the country. We did not even walk one single kilometer, but we reached the lighthouse by car and I really had to smile when I saw the stone with the typical shell for the Way of St. James there. Normally, there are written the number of kilometres left to the end of the world. On this stone, there was written only a zero. A small souvenir shop is placed on the hill and there’s a cute little restaurant where you can have lunch and some ‘Agua km cero’. The view is fantastic and you can barely see the curvature of the Earth by looking out at the sea. 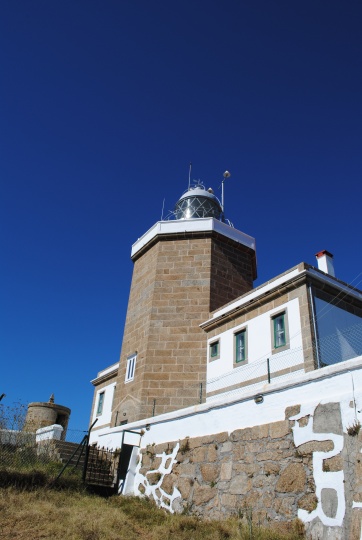 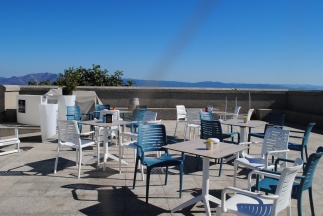 Even older than the lighthouse of Cape Finisterre is that of A Coruña. It is placed on a foothills next to several stone monuments I will tell you later about. The lighthouse is called Torre de Hercules and is about 55 meters high. According to legend, the tower was created from a rock on which Hercules was fighting with the giant Geryon for three days and three nights. Hercules won the battle and the people built the lighthouse out of gratitude. We paid 3€ per person and took the 242 steps to get on top of this tower. I was something queasy, but the view was worth climbing up the narrow corridor. You got a beautiful view on the city behind you and also to the wide sea in front of you. On the ground you can see a kind of compass or wind rose. 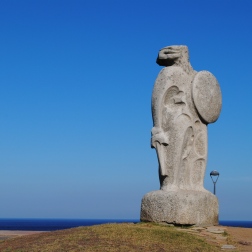 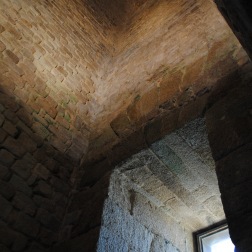 So the stone monuments I told you about are just round the corner on the same foothills. The stones are simple but I necessarily wanted to see them because they do have a special mystic beauty in my eyes. They are called the Menhires Pola Paz and it is a Commemorating for the men who were shut down in the spanish civil war in 1936. The monument consists of blocks of granite in which there are red spots that symbolize the blood of the shot men.

But neither this, nor the football stadium makes the city A Coruña so special. Rather, it is the galerías, the white, glazed wooden verandas with the innumerable small windows, which are nowhere else in Spain, and which earned A Coruña the name “the Glass City”. I saw a lot of windows, but I don’t think that this name is really earned.

What about the food in Galicia?!

In almost every restaurant in Galicia, you can try he Spanish Pepper Challenge: Take a plate of hot Pimientos de Padrón and bite into the green vegetables. Then there are two possibilities: Either nothing happens, or the whole mouth burns like fire. The vulgar thing about it: you never know when it will happen and if at all – you will not see the Pimientos if they are sharp or harmless. Russian roulette in Galician, because the little green devils are, as their name says, grown in the small Galician village Padrón. 15 tons of it are harvested here every year. 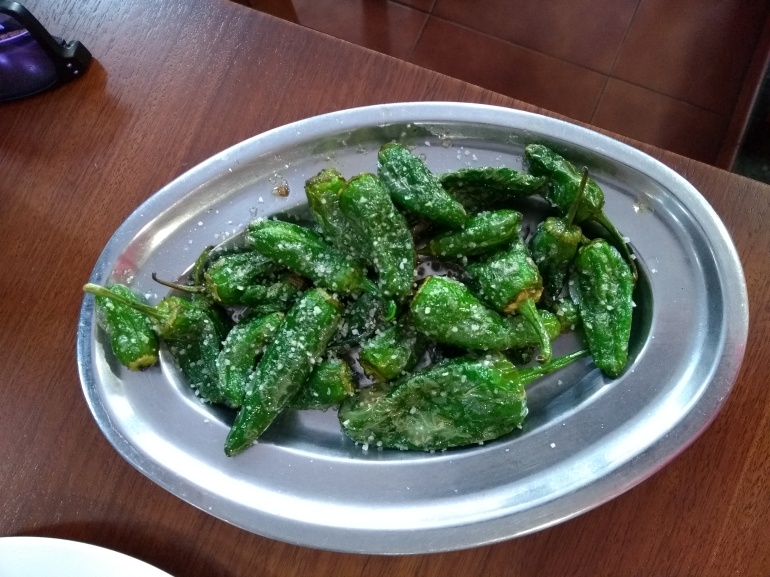 The steeper the rocks that jut into the sea and the more wildly the spray blows to the stone, the better flourishes in the hard to reach cliffs a special delicacy: The duckfish, called in Spanish Percebes. Up to 200 euros costs a kilo of barnacles, which are actually a kind of crabs. We tried to eat some, but this mission turned out to be more difficult than expected. We found only one restaurant in A Coruña who had this speciality. But they wanted to have 120 Euros for one kilo and we had to take at least 250 gramms. So we renounced. 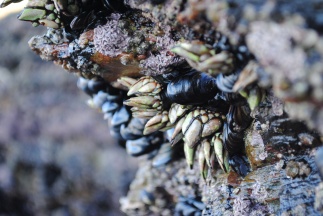 Almost there would be no more delicacy. When the oil tanker Prestige sank off the Galician coast in 2002, 64,000 tons of heavy oil ran out and destroyed all life: 250,000 seabirds died and of course it was over with the Percebes. The wreck is – sealed – still at a depth of 3,600 meters. It took ten years for nature to recover to some extent from the effects of the oil spill. The captain of the overloaded tanker was sentenced to two years in jail.
Meanwhile, Galicia is once again a paradise for lovers of seafood on the plate. From spider crabs to crawfish and crabs everything is prepared here. And even in the smallest restaurant, the tables are lushly covered. We also tried some Pulpo, which is Octopus. Although I am less excited about eating this animal because of its intelligence, I must admit that it was really delicious.

So what else to tell?

The humid climate is due to another peculiarity, which is found everywhere in Galicia, and whose meaning only opens up at second glance: the Hórreos. They are made of granite and wood and look like dog kennels on stilts. They serve to dry the corn and the grain. There are 30,000 of them and they are one of the many examples of the Celtic past of the region: on the gable, many of them carry not only a cross, but also a pyramidal structure – the Fica, a Celtic fertility symbol.

Pretty atavistic is a custom that is cultivated every year in the first week of July in Sabucedo in the province of Pontevedra: the “Rapa das bestas”, the wild horse drive, where the young men of the area ride in the early morning into the mountains to find wild horses and ride to the village. There they try to rise with daring maneuvers and cut the horses’ manes. A battle between man and beast dating back to the 15th century. Animal rights activists do not find the “Rapa” as great as the boys who want to prove their strength and masculinity here. Nevertheless, it is celebrated every year and ends in the evening with a communal meal, music and dance in the village. As I am a big fan of animals, I did not want to watch this spectacle at all and I would be glad if one day, this would be prohibited.

But as we are talking of animals: I was surprised to not see any hungry animal there. I saw some wild cats – but they were not too skinny and someone even made a shelter for them. This was my highlight within these two weeks: 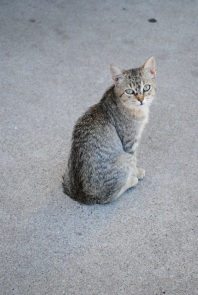 Those who expect castanets and flamenco in Galicia when it comes to music are wrong. The stars of folklore like Carlos Nuñes, who comes from Vigo, or Susana Seivane play bagpipes – like the Scots or the Breton. They are accompanied by harp and hurdy-gurdy like the Irish, the melodies are Celtic.

My boyfriend and me came here for a mixture of cultural stuff, beautiful landscapes and specially for surfing. There are so much beautiful abandonned beaches with white and clean sand. As I am a beginner, I was a bit afraid that it would be annoying for me to wait until he finishes catching the waves. But it was just amazing watching the sea, the big waves, the wide beach and the seagulls above me. I could do this the whole day and it is so nice being with my man and in the same time, being almost all alone surrounded by this wonderful nature. We even saw some dolphins – that was just amazing.

The road to the beaches are beautiful and there are woods and green trees, meadows and nice little wooden peers who lead along the coast. As I forced my boyfriend to train with me, we were running to the lighthouse of Laxe and saw also some other beautiful places by feet like the Playa de los Cristales: 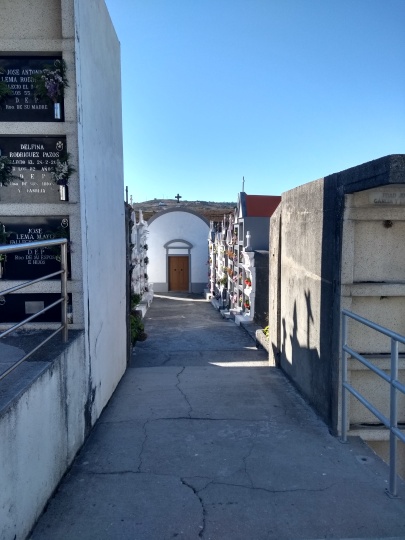 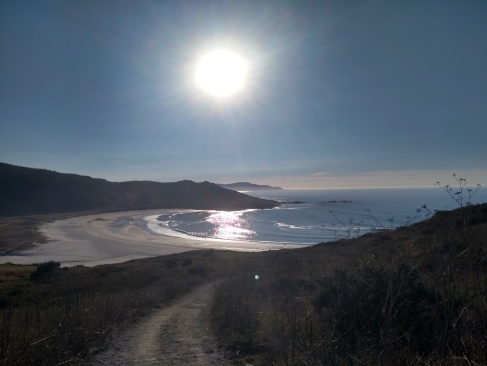 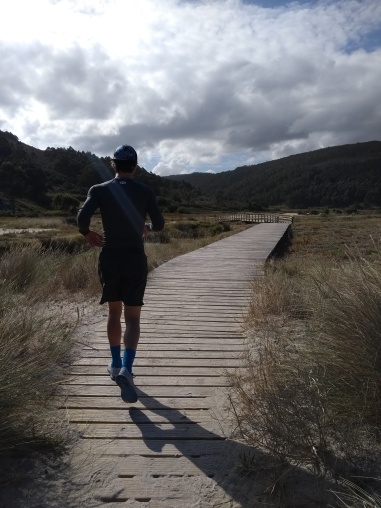 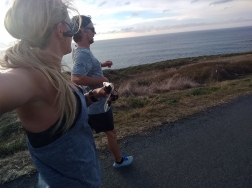 By the way, the memorial “The Waiting” (the woman out of stone) shows a mother looking at the sea with her son on the arms, and is a tribute to the sailors who lost their lives working in the sea. This side of the coast is called Costa de Morte because of this.

What I liked most of everything in Galicia is the Playas de las Catedrales up in the north of the region. I can’t explain its beauty, just watch this:

Thanks Galicia, I will come back one day and hope that your beauty will be untouched!